Reading..
‘Naming Jack the Ripper’ by Russell Edwards. I have been busy reading bits of other books and so I haven’t made huge progress with this book since it featured in a previous post but I am still finding it an enjoyable read! I am also enjoying reading sections of the ‘Oxford Handbook of Criminology’ along with many other books I have yet to get around to reading!

Watching..
Being on maternity leave I have found myself watching more television than usual – particularly in the evenings! I usually watch programmes on catch up and as always have been enjoying Question Time, a number of programmes on the Crime and Investigation channel and I have found the recent series, 24 hours in police custody, extremely interesting. I have also enjoyed watching Russell Brand’s YouTube videos.

Doing..
Although as mentioned I am currently on maternity leave I am still continuing my voluntary work as a mentor to male offenders who have served sentences no longer than 18 months upon release from HMP. I have been involved in this particular project for a number of years and thoroughly enjoy it. I think that support during and after prison is vital in the rehabilitation of those who find themselves involved in the prison system and I see myself being involved in this for as long as possible. I have just been involved in the interviewing of potential new mentors which has given me a great opportunity to reflect on my (nearly) three years with the project.

Enjoying..
I am really enjoying being able to spend time with my little boy whilst having the freedom to read and research everything of interest now that I have finished my degree. It’s also December now which is my favourite time of the year and I am looking forward to Christmas! I will be treating myself to a new book at Christmas as I haven’t bought a book for myself in months as I have been trying to get through some of my many unread books! 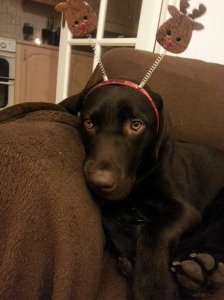 Disliking
I understand that, where appropriate, strikes are important. However I am slightly disappointed that the Open University seem to have released exam results for those who undertook exams in October however DD307 results have been affected by the recent strikes and, as of yet, there is no official date as to when we will receive these. I was unimpressed that results for the other modules were released and then DD307 students received an email stating that we are probably aware other modules have been released but ours haven’t.